How Beninese cook, others stole politician’s $22,000 in Abuja

A Beninese cook engaged by a politician, Casmir Anyanwu, has stolen a safe containing $22,000, four days after he was employed in Abuja.

Samuel Tchiki, allegedly connived with his compatriots to steal the safe, which they ferried in a taxi to Mpape, a suburb of Abuja, where they vandalised it and then embarked on a shopping spree with the money.

Tchiki and his friends bought television sets, sound systems, generators and other domestic appliances with the money, but the police recovered about $13,000, which they had yet to spend.

Tchiki and his accomplices, Francis Kpohouede, George Akinto, Donald Tokpe, Honore Tokpe and Emmanuel Savi, were paraded by the police in Abuja on Thursday. 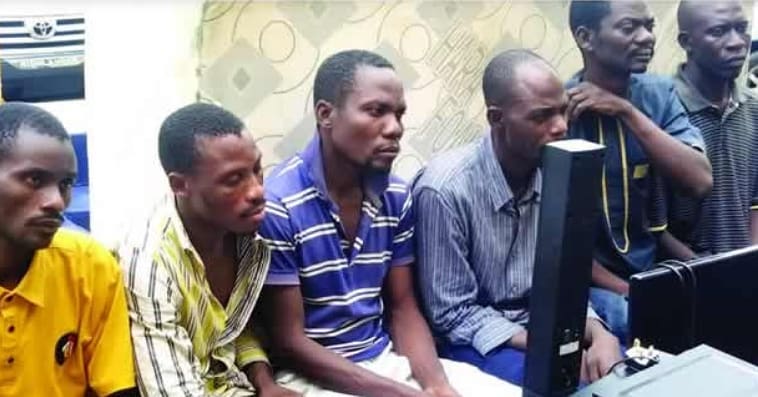 Tchiki told Northern City News that he solicited the assistance of his compatriots to move the safe to Mpape, where they used a hammer to force it open, adding that they found $22,000 and documents inside it.

“When my boss, Casmir Anyanwu, travelled, I got my friends to carry the safe from his room and we took it to Mpape, where we opened it. We found $22,000, which we shared. I gave my brother $600. I spent my share on clothes and home appliances. I don’t know what got into me; I can’t say why I stole the money,” he said.

The Beninese, who has been living in Nigeria since 2008, explained that he once worked in a hotel in Calabar, Cross River State, but moved to Abuja on account of the poor salary.

Donald, who recommended Tchiki to Anyanwu for the job, said he got $4,000 out of which he spent $1,000 on personal effects.

George, who participated in the destruction of the safe said, “I was in Maitama when Tchiki called me that he wanted to take his boss’ safe; so, I went to meet them and we broke it with a hammer. We found $22,000 and documents in the safe and the others gave me $2,000.”

The other suspects also admitted their roles in the theft of the money.

The Commissioner of Police, Federal Capital Territory, Bala Ciroma, advised residents to carry out background checks on domestic workers before engaging them.